Kevin Sampson: Solo Exhibitions In New Jersey and Beyond

“I’m a Civil Rights baby. I grew up laying across picket lines and blocking traffic.” Artist Kevin Sampson’s father, Stephen, was a well-known Civil Rights leader in New Jersey, and he instilled a commitment to community that his son still honors.

Community, politics and the spiritual intertwine in all of Sampson’s art, from his found-object sculptures, to his public art and murals. And right now is a good time to see Sampson’s work, with solo exhibitions at the Visual Arts Center of New Jersey, Express Newark and at the Mystic Seaport Museum in Connecticut. 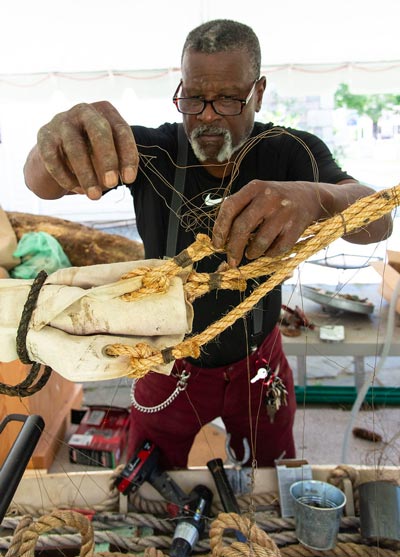 The playful, almost naive surfaces of Sampson’s sculptures are immediately involving: there’s a game in identifying fragments and parts such as cowrie shells, bicycle chains, Mardi Gras beads or old toys. But soon, you begin to notice greater depths, and often darker meanings.

He began making sculpture in the 1980s after his cousin died in the AIDS epidemic. Sampson gathered objects from her backyard and assembled them into a memorial – the first of many monuments he’s made since then.

“Engine Company 107 New York” honors the Sept. 11 firemen; it’s made of old fuses, pieces of wood painted to look like matches, a radio and piano keys arranged in an almost organ-like manner.

The “USS Harriet Tubman” has the shape of a Civil War-era ship, adorned with old ropes, chains and bullets, as well as what look like pearls and coins. Sampson made the ship as a tribute to the anti-slavery activist, one of his childhood heroes. 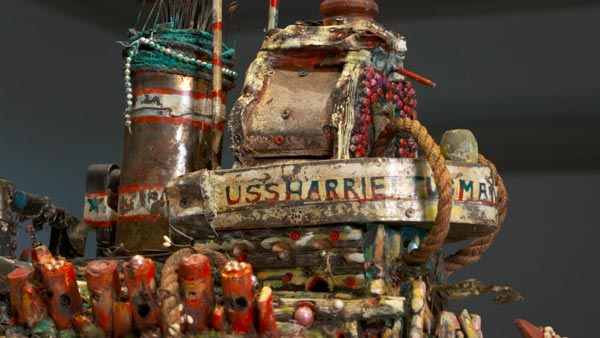 Sampson is always working, whether in his studio in the Ironbound section of Newark, in his friend’s woodworking shop or on location. For his solo exhibition at the Visual Arts Center of New Jersey in Summit, he painted a mural on site, working with his friend and fellow Newark artist, Kevin Darmanie. The mural intermixes political images and phrases with science fiction-like energy transference and a mutated figure of Lady Liberty coming to pieces.

The show’s title, “Black and Blue,” is referenced in the mural, along with the phrases “Black Lives Matter” and “Blue Lives Matter” on either side of the energy transference. Both movements have deep meaning for Sampson, as an African American who was on the police force for 18 years before retiring to pursue art full time.

In addition to the mural, the exhibition includes found-object sculptures, drawings and a recent series of porcelain sculptures responding to the Black and Blue Lives Matter movements. “Black and Blue,” in the main gallery of the Visual Arts Center of New Jersey, runs until January 27, 2019.

Sampson has a smaller solo exhibition running “in conversation” with “Black and Blue” at the Box Gallery at Express Newark, one of the Paul Robeson Galleries of Rutgers University-Newark. Titled “Olde Soul,” it features rarely seen drawings, sketches, early sculptures and ephemera from the artist’s studio. The exhibition runs through February 23, 2019, with an opening reception on October 18.

Sampson is often described as a “self taught” or “outlier” artist, more for the style of his work than anything else. Not only did he study at the Newark School of Fine and Industrial Art, Kean College and the Art Students League, he also trained to be a composite sketch artist while with the Scotch Plains Police.

In Sampson’s opinion, people “change things into their own cultural language so that they can understand it.” It’s one way of understanding his art, which emerges from a found-object artistic tradition found all over the world, from the folk artists of Haiti to culturally mainstream artists such as Picasso and Man Ray. For Sampson, the objects he chooses to use in his work make it richer because they bring with them their own histories: “It’s about attaching yourself to one’s community,” he says, “it’s about a sense of place and memory.” 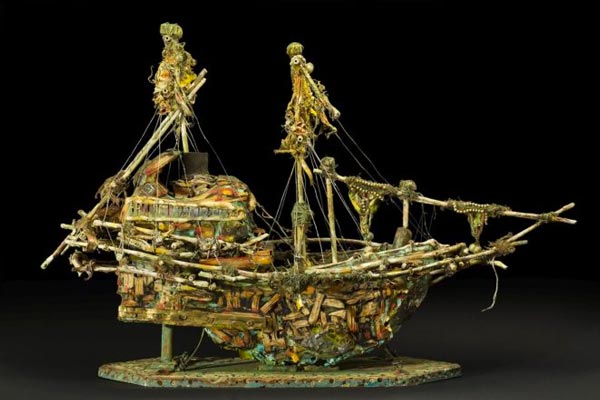 Sampson’s art is powerful because it works on so many levels, and connects with so many people. For those traveling through Connecticut anytime soon, it’s worth planning a stop to see Kevin’s third solo exhibition up right now, “Monument Man: Kevin Sampson in Residence,” at the Mystic Seaport Museum through the Spring of 2019. Mystic Seaport is featuring a wide selection of his ships, including the “USS Harriet Tubman,” the “USS Alligator 2” and the life-size “USS Kye Kye Kule,” which he constructed while in residence at the Seaport for three weeks in the summer of 2018.

Visit one of Kevin Sampson’s current exhibitions or follow his lively posts on Facebook to find out what else is happening in this busy artist’s life. Watch the recent State of the Arts profile of Kevin Sampson at Mystic Seaport here.